Here is my recipe for a delicious slow cooker roast beef. With no added salt, it’s an ideal recipe for easily cooking a large, tender and juicy piece of beef.

Be aware that current recommendations indicate that renal patients should prioritize plant based proteins to better preserve their kidney function.

On the other hand, it is not forbidden to consume a reasonable portion of red meat very occasionally. The goal is not to completely ban a specific type of food.

That’s why I present this slow cooker roast beef recipe for anyone who would like to cook a good piece of meat without added salt.

Here are the nutritional values and claims of this recipe.

For informational purposes only.

How to make a good slow cooker roast beef

Here are my tips for making a great slow cooker roast beef.

Searing the meat is not a mandatory step, but it will have much more flavor when seared than if you put it directly in the slow cooker. Considering that there is no addition of salt, this little trick that enhances the taste is worth it.

No need for expensive meat

The real magic of the slow cooker is that it can turn almost any piece of meat of lesser quality into a worthy meal.

It is not necessary to buy an expensive cut of meat. Generally, I buy discounted boneless bottom blade roast when available. Then I put it in the slow cooker the same evening so that it’s ready the next day to prepare lunches for the following days.

When you add the broth to the slow cooker, you might think that there is not enough liquid in the bottom of it. Don’t worry, that’s exactly how I do it and I never run out broth while it’s cooking.

It is not necessary to use a large amount of broth for this recipe. During cooking, meat and vegetables will continue to increase the volume of broth.

At the end of this recipe, I remove the meat from the slow cooker, add cornstarch to thicken the broth, put the piece of meat back and cook it again for 30 minutes semi-covered. But depending on your preference, it is possible to simply finish cooking without putting the meat back in the slow cooker.

For this recipe, you can use a variety of vegetables. If your diet allows, you can use turnips, potatoes, parsnips, etc.

As for the broth, it is very easy to modify it. You can use any type of unsalted broth or vinegar. You can also replace honey with maple syrup.

It is also possible to add other ingredients such as spices or herbs to customize your broth to your taste.

Here are 2 very simple suggestions that significantly increase the flavor of this recipe in exchange for increasing the sodium content a little.

The first is to spread a little Dijon mustard before spreading the garlic on the roast. Dijon mustard will increase the sodium content a little, but will add a lot of taste.

The second is to use sodium-reduced beef broth instead of unsalted broth. Since there is not a large volume of broth for the entire recipe, the addition of sodium can be considered reasonable and the taste will be greatly improved.

On the other hand, you will have to pay attention to the nutritional values of the broth you will use. Sodium content can vary greatly from brand to brand.

Note that you can also use sodium reduced broth diluted with water. From experience, I have found that broth reduced in sodium diluted by half generally offers more taste than undiluted unsalted broth.

It is also possible to replace the pallet roast with another piece of meat. For example, you could use a pork shoulder.

A slow cooker beef pallet roast can be kept for 3 days in the refrigerator or about 3 months in the freezer. 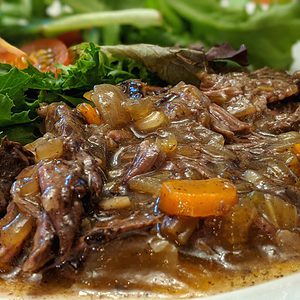 Here is a simple recipe to prepare a delicious piece of beef without added salt. All you have to do is take your slow cooker out of the cupboard and let it cook quietly to enjoy a great meal.
5 from 8 votes
PREP TIME30 mins
COOK TIME7 hrs 30 mins
TOTAL TIME8 hrs
SERVINGS10 servings
CREATED BYMarc-Andre Vachon
REVIEWED BYRoxanne Papineau, RD
KIDNEY NUTRITIONHigh protein | Low sodium | Source of fiber | Source of iron
PRINT RECIPE PIN RECIPE
PREVENT SCREEN FROM TURNING OFF

For informational purposes only. Nutrition data is primarily calculated from the USDA National Database. Values may vary from accuracy of measurements, brands, nutritional data and more. All measurements are metric (1 cup = 250ml). Readers are encouraged to make their own calculations.

Roxanne Papineau, RD, is a clinical dietitian specializing in nephrology. She revises the recipes on this site to make sure the content meets the most up-to-date recommendations for people with kidney disease. This site is under revision and several recipes therefore still have to be validated for the moment.

You do not have any posts.

Kidney Healthy Recipes is dedicated to all kidney warriors fighting to protect their kidney function, surviving on dialysis or living with a transplanted kidney. Here you will find kidney friendly recipes that are low in sodium and contain protein in controlled amounts. You will also find articles with the latest recommendations from professional dieticians on kidney diet. (Available soon!)