I have to admit that from time to time I crave a good salty Vietnamese soup. As a kidney patient, this is one of the many things I miss a lot. That’s why I decided to create this low sodium vegan pho.

Is a pho still a pho without soy sauce (or any other extra salty alternative) and a salty broth? I think the answer is yes, but again, an original pho isn’t vegan either. So it’s a matter of perception and taste. If you think that this low sodium vegan pho is still a worthy pho soup, then the recipe is just below.

Generally, this kind of soups is really salty! So, this renal recipe was made to be mostly low in sodium and plant based. In addition, it is low in phosphorus and a very high source of fiber.

Broth ingredients for this low sodium vegan pho include unsalted vegetable broth, yellow onion, garlic, ginger, rice vinegar, and brown sugar. These are the ingredients used to add flavor to the broth apart from spices.

This is the heart of the recipe. For this spice blend, I used star anise, cloves, cinnamon stick, coriander seeds, fennel seeds, and cardamom seeds. Lightly grilling these whole spices and boiling them in the vegetable broth is what creates the unique aromas of this recipe.

To make pho, rice noodles are usually used. But you can try any other type of noodles. I haven’t tried it, but egg noodles should be great too in this recipe.

When shopping for rice noodles, try to find large noodles and watch for sodium content. Some are high in sodium, others are very low.

That part is yours. You can use this recipe as an example. This means that you can choose the toppings you want to use.

Keep in mind that the nutritional values of this recipe include broth, noodles, and the suggested toppings. Make kidney friendly choices if you use different toppings or ingredients.

How to make a low sodium vegan pho

There are many ways to make a pho, but I used a very simple and straightforward methodology to reduce the amount of manipulation. The simpler it is, the better.

Heat a medium pot over low heat and roast the whole spices dry until fragrant, about 30 seconds. This will improve the flavor. If you are afraid of burning the spices or want to save a step, it is possible to skip it without affecting the overall flavor too much.

Once the spices are ready (if you roast them), simply add all the ingredients from the broth to the pot. Bring to a boil over high heat and simmer over medium-low heat for about 30 minutes.

If you do other things in the meantime and need more time, you can let the broth simmer a little longer. Once the broth is ready, strain it and discard (or compost) everything except the broth itself.

Cook your noodles and prepare your toppings

While your broth is simmering, you have plenty of time to prepare your noodles. To cook them, simply follow the instructions on the package.

Usually, all you have to do is bring a pot of water to a boil and cook your noodles in it for about 2-3 minutes. You can also prepare your toppings while your broth simmers.

This is the creative step. If you want to look like a cooking pro, now is the time to shine.

First, add the broth with the noodles and protein if there are any. Then you can add for example the green onions, bean sprouts and all the other toppings you want to make this dish beautiful and impress everyone!

This recipe is a blank canvas waiting for your creativity. If you make changes, use toppings that respect your nutritional needs and add color to your pho. For this recipe, I added a corner of lime, chopped green onions, cooked bok choy and sprouted beans.

Char the ginger and the onions

Onion quarters and ginger slices can be charred in the oven, on the barbecue or over the fire. This will add another layer of flavor. But it’s more work and depending on your kitchen it may be too much trouble to do so I didn’t include this in the original recipe.

The spice blend used in this low sodium vegan pho can be customized at will. For example, if you like spicy dishes, you can add hot pepper flakes or even spicy peppers. I haven’t tried it yet, but someday I’ll try adding some Thai chili while the broth is simmering.

Use beef broth and meat

Usually, pho is made with beef broth and is served with meat. If you don’t need this recipe to be vegan, you can easily use unsalted beef broth and add meat instead of tofu. However, this recipe will be richer in protein, phosphorus and potassium.

If you don’t plan on consuming all the pho, I suggest keeping all the ingredients separate for later use and cooking fresh noodles again.

This way you can reuse the broth already prepared later and simply make a new bowl of pho. The broth should last at least a week in the refrigerator.

I do not highly recommend freezing this soup, nor any soup with noodles. But you can easily freeze the broth or even make ice cubes of pho broth!

The best way to reheat this recipe is to boil the required number of servings of rice noodles in vegan pho broth once simmering over medium-high heat. Then simply add the other ingredients to the hot broth to warm them up. 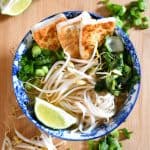 This is my low sodium version of the classic pho (Pronounced ''fuh''). It doesn't have the same taste as the traditional pho, but is tasty in it's own way with all the fragrant spices used. For me it's the perfect compromise to get a flavorful and kidney friendly Vietnamese soup.
4.8 from 4 votes
Low phosphorus | Low sodium | Vegan | Vegetarian | Very high source of fiber
Created by Marc-Andre Vachon
Revised by (Not revised yet)
(Prevent screen from turning off)
Share on Facebook Pin Recipe Print Recipe
This page may contains affiliate links. Click here to see the affiliate disclosure.
Preparation 30 mins
Cooking 30 mins
Total 1 hr
Course Appetizers, Main Courses, Soups
Method Cooktop
Servings 2 bowls
Calories 350 kcal

Note 1 – Nutritional calculation Nutritional facts consider that all the nutrients in the onion, garlic cloves and spices are consumed and not thrown away as directed in the recipe as there is no way to have an exact calculation of what these ingredients leach in the broth. Note 2 – Suggested toppings The toppings in this section (Suggested toppings) are included in the nutrition calculations. These toppings are suggestions only and are not essential to this recipe. You can skip them, choose completely different ones and use different quantities. In this case, bear in mind that the nutritional values will be different.

This recipe is for informational purposes only.