Here’s my low sodium mushroom gravy sauce. This recipe aims to give you a way less salty alternative to commercial gravy sauces. Even if it is lower in sodium, it remains very tasty due to some tricks!

This low sodium mushroom sauce is lower in sodium the commercially sold ones.

I usually use unsalted broth in my recipes, but for this one I made an exception. For this recipe, I use a sodium reduced broth and a little Worcestershire sauce instead.

After several tries, I found that it is possible to dilute half the broth with water while retaining enough flavor. This makes it possible to divide into 2 the sodium intake of the broth.

As for Worcestershire sauce, it can be easily omitted, but it is important to complement the overall flavor of this low salt gravy without adding too much sodium.

Here are the nutritional values and claims of this recipe.

For informational purposes only.

This low sodium mushroom gravy is easily customizable. You can modify it as you like as long as you keep the basic proportions of broth, water and flour.

You can simply make gravy without mushrooms or green onions. To do this, omit these ingredients as well as pepper and herbs. You will get a more traditional gravy.

You can also omit garlic, but note that it adds a lot of flavor without increasing the amount of sodium.

You can replace green onions with a similar amount of another type of onions or shallots.

Just like onions, you can use other types of mushrooms such as shitakes or cremini mushrooms to get a different flavor profile.

It is also possible to use all-purpose flour in tis low sodium mushroom gravy, but ideally, you should prioritize whole wheat flour which is higher in fiber.

It is possible to make it with unsalted broth and without Worcestershire sauce. However, after testing it myself, the result is acceptable, but rather bland.

Ideally, this gravy should be served freshly cooked. It can still be stored for 3 to 4 days in the refrigerator, but it will thicken a lot. It will then be necessary to reheat it in a saucepan and add a little water to obtain the desired texture. 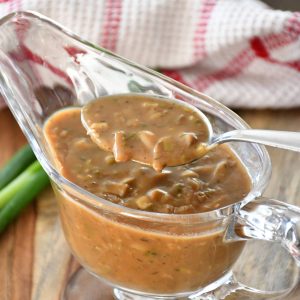 For informational purposes only. Nutrition data is primarily calculated from the USDA National Database. Values may vary from accuracy of measurements, brands, nutritional data and more. All measurements are metric (1 cup = 250ml). Readers are encouraged to make their own calculations.

Roxanne Papineau, RD, is a clinical dietitian specializing in nephrology. She revises the recipes on this site to make sure the content meets the most up-to-date recommendations for people with kidney disease. This site is under revision and several recipes therefore still have to be validated for the moment.

You do not have any posts.

Kidney Healthy Recipes is dedicated to all kidney warriors fighting to protect their kidney function, surviving on dialysis or living with a transplanted kidney. Here you will find kidney friendly recipes that are low in sodium and contain protein in controlled amounts. You will also find articles with the latest recommendations from professional dieticians on kidney diet. (Available soon!)